The perfect method to administer hgh injections for anti aging

A primary concern with hgh therapy is that while a person is undergoing the therapy, his blood levels for igf-1 have to be closely monitored.
Not only that, there are side effects to worry about and too high dosage or too frequent injections can cause problems.
So, can there be a perfect or optimum dosage of hgh and how shall hgh injections be administered with maximum results and minimum side effects.
Dr. Chein and Terry, well renowned medical professionals in anti aging field believe that the positive clinical results they accomplished in their study were majorly because of the method of HGH dosing they had developed.
Their goal was to increase the blood concentrations of IGF-1, the hormone stimulated by the breakdown of growth hormone in the liver, which actually does most of the work of GH in the body
The level of IGF-1 they chose was 350 nanograms per milligram, the same amount that Rudman found “increased lean body mass, decreased body fat, increased vertebral bone density and increased skin thickness,” say the researchers.
But there were problems – side effects.
Although it brought about the desired bodily changes, it caused serious side effects because it did not mimic the body’s normal pattern of GH release by the pituitary.
It was observed that high dose low frequency injections that Rudman used did not match the natural production of hgh in the body. 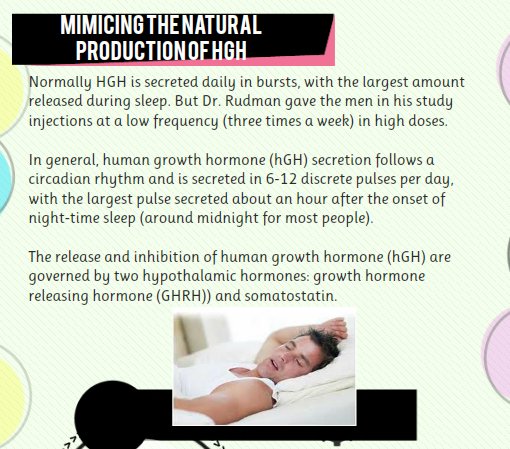 Dr. Chein and Terry had gone in exactly the opposite direction with their high-frequency, low-dose (HF-LD) strategy.
They used one-quarter to one-half of Rudman’s weekly dosage, 4 to 8 IU a week, or .3 to .7 IU twice daily. And they taught their patients to administer HGH subcutaneously before sleep and upon arising six out of seven days a week.
The seventh day without HGH is to stop the negative feedback on the pituitary itself so that it continues producing that hgh which it is producing.
The nighttime and morning injections cause two daily bursts of GH, one during sleep and the other during the day.
The results were encouraging – Remarkably reduced side effects!
The main reason of their success was that their pattern of giving hgh shots to the patients were high-frequency, low-dose that closely resembled the natural production of body’s own hgh.
In their own words – 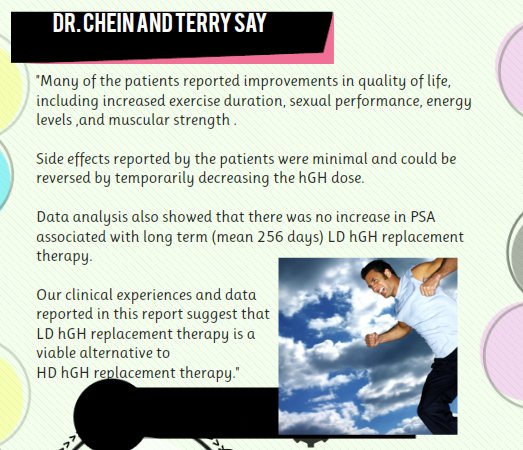 GROWTH HORMONE DID NOT CAUSE CANCER
Most significant is the fact that there were no documented cases of cancer among all the patients treated at the clinic.
This is particularly reassuring since some investigators have been concerned that growth hormone could cause undetected cancer cells to divide more rapidly. 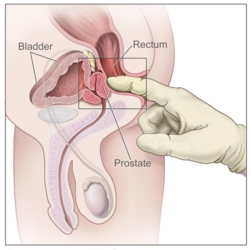 More impressive is the fact that the levels of prostate specific antigen (PSA) levels, an identifier of prostate problems such as cancer, did not elevate among any of the male subjects.
And in one scientific study, growth hormone actually seems to have reversed the course of prostate cancer.
Dr. Chein points out that the growth hormone prompted the immune system, along with the natural killer cells, which systematically eliminated the cancer cells.
In his words- 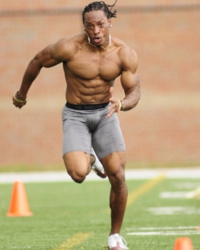 In summary, heavy intensity exercise induces the secretion of human growth hormone (hGH), encouraging the consumption and burning of fat as fuel.
This, in return, spares muscle carbs, helps to keep body fat down and muscle mass high and improves adaptation to specific exercise stimuli.
The benefits are clear, but simply switching to high intensity workout for the whole year is not the answer; rather, a comprehensive workout program to beat aging is more recommended for a variety of reasons.
And hiit (high intensity interval training) can be an important part of this comprehensive workout program.
Stay tuned as I update “The HGH Plan” workout program to maximize the hgh production in the body.